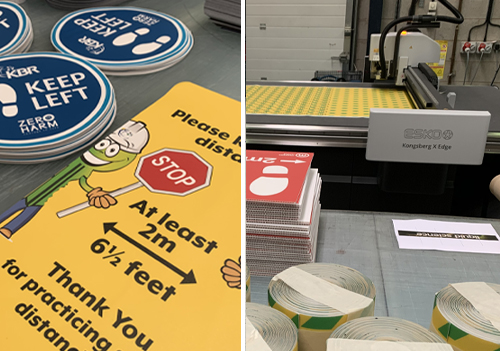 However, owner and managing director Dave MacDonald hadn’t anticipated how the arrival of the X24 would place Poppy Signs on the frontline for the volume production of external floor graphics.

A day after the X24 installation had been completed and two days before training was scheduled to begin, a huge order through a long-standing client for a major national infrastructure company was received. This meant the company had to enter into immediate, live production mode with just a couple of hours training under its belt, although CMYUK was on call to provide any help and guidance required.

Since then, the X24 hasn’t stopped, cutting over 4,000 sq.m of print since installation with no obvious signs of slow down. Poppy Signs has been working flat out, 6 to 7 days producing floor graphics, both installing them or delivering supply-only output for large stations across the country.

“The brand of floor graphics we use is about the best you can buy,” says Dave.  “It's just the most durable external pavement grade vinyl that you can get.  Could I have cut it any other way?  Absolutely not! We wouldn’t have been able to cope with everything we have done without the Kongsberg,” he says.

Dave Macdonald founded Poppy Signs in 2004. Since that time it has grown year-on- year by an average of 10 per cent, and with a staff of 12 is becoming a significant supplier across the North.

Specialists in all types of signage – the company has evolved from 100 per cent direct end-user service to become a leading turnkey trade services supplier to marketing agencies, corporates and a trusted sub-contractor providing full end-to-end service.

“We’re mostly an open book,” says Dave. “Most people will know that we are Poppy Signs and we'll be brought in as a specialist. About 50% of our revenue now is from strategic partnerships with other marketing companies and agencies.”

Since inception the company has routinely run roll-to-roll printers and also has a flatbed, laser cutter, a banner welder too, plus all the usual manufacturing workshop tools sit alongside a 2 x 4m dedicated CNC Router, Summa and Graphtec plotters.

The company was finding with the mix of finishing machinery and manual cutting, capabilities were continually being outstripped by demand.    “I don't want my valuable people standing at a bench for hours and hours on end just guillotining and ruler cutting,” he says.  “As good though they are with growing volumes you are always going to get glitches in quality.”

The search for new cutting and finishing capabilities began last summer when Dave began posting online, canvassing industry opinion and organising half a dozen or so demonstrations.

“I've looked at every machine on the market available from Chinglish imports to top end brands and everything in between. I looked at them all but the Kongsberg just exudes quality,” he says.

Dave also reached out to Sue Hayward, Digital Sales Consultant at CMYUK, who he’d known for many years. “I trust Sue. There's nothing she would say to me that was an untruth or sales speak. Everything she has told me has been factually correct,” he says.

CMYUK is the exclusive distributor of Kongsberg cutting equipment in the UK and Dave went to its Demonstration and Knowledge Resource Centre in Shrewsbury to put the Esko X24 through its paces, where Nick Reed, CMYUK’s ESKO Business Manager, gave Poppy Signs the CMYUK ESKO treatment.

“Nick Reed gives the best demos,” says Dave. “I’ve had four separate demos on different machines and he is easily by leaps and bounds, the best technical demonstrator that I’ve seen out there.”

Poppy Signs initially bought its machine with the three default tools:  kiss cut, cut through/rigid knife and router, but in the very near future plans to purchase the reciprocating tool and creasing wheel with possible additions. It also opted for the integrated camera for accurate vision cutting.

The X24 features a steel construction tabletop, along with automatic sheet feeding that permits quick and accurate loading of both flexible and rigid sheets.  Automated roll feeding is also available which can be integrated with sheet feeding to meet production volume needs with diverse material requirements.

“The quality and price is exceptional. There's nothing that matches that performance at that price on the market today,” he says.

At the start of lockdown Poppy signs had furloughed members of its team but with the arrival of the X24 three weeks in, staff were recalled and business has been consistently busy since.

“Without the Kongsberg we would never have been able to cope with everything that we’ve done. Our clients who are very loyal to us would begrudgingly have to have gone elsewhere to fulfill some of it,” says Dave.

Dave believes that Poppy Signs would have looked very different going through the Lockdown without the X24, but because the digital cutter has enabled the company to work throughout, it has created a buffer for Poppy Signs as it moves forward into the new normal.

Poppy Signs already has a roadmap for its future, one that was devised six years ago and which became viable with the purchase of the X24 in February.

Dave has been accruing domain names. He is now the proud owner of over 75 of the top 100 towns in the UK accompanied by the word ‘sign’, so for example, he owns Liverpool Signs, Newcastle Signs, Belfast Signs and so on. He also owns 31 of the 32 London Borough name domains such as Chelsea Signs, Brent Signs, and Lambeth Signs etc.

His plan is to launch a national e-commerce printing network comprising of local facing websites where customers can order banners and printed signs online. The virtual orders will be printed and finished at the firm’s Chorley premises alongside the work that comes through Poppy Signs.

“The original reason for the Kongsberg was so I could consolidate 30 banner orders that come in overnight from all these disparate websites, all printed on one roll and then trimmed on the digital cutter so I could be competitive. The Kongsberg will allow me to make some passive income through e-commerce-based sales, which I could finish economically, alongside my real world tangible business,” he says.

What Dave is looking forward to is having a chance to really experiment with the varied functionality of the X24, and perhaps get round to finally finishing the training.

CMYUK appoints Materials Solutions as its distributor in Ireland