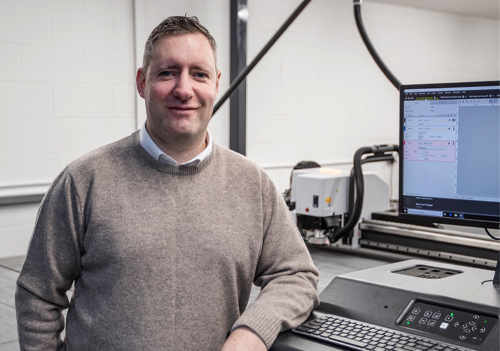 The need for a cutter

The sale was instigated by the need to fulfil a sizeable trade job for a major retail collaboration. This involved applying standard vinyl to 16,000 pre–routed lacquered MDF panels. However, the trade customer developed an issue with its CNC router, and was about to pull the plug on the project when Matt decided to step in, buy a digital cutter and save the day.

Matt’s first port of call was to Sue Hayward –– a long term trusted sales contact, now Senior Digital Sales Consultant at CMYUK.   Matt was invited to CMYUK’s demonstration showroom in Shrewsbury, where he was introduced to Nick Reed, CMYUK’s Esko Business Manager who introduced him to the considerable proven benefits of the X24.

It was love at first sight, and the Kongsberg X24 was swiftly despatched to Preston, with Matt having one-to-one training on the system with CMYUK.

The Kongsberg X24 forms a central hub that ignites fresh ideas and concepts, which importantly attracts new customers. It has also automated many processes saving time and money. For example, Optimum produces 750 signs every three to four months on a constant rollover for one client. This has traditionally taken two and a half to three days to produce, but the X24 has taken this down to four hours, with an hour and a half of actual operator input.

Says Matt: “When we delivered this job for the first time, the comment that immediately came back was had we bought these in from somewhere else? The quality was so much better. Previously we had been applying 750 graphics to 750 panels, now we apply graphics to four large panels and the X24 does the rest.”

The company produces a whole plethora of signs from digitally printed ones to traditional neon with it being the only company in the UK that manufactures both neon and LED signage in-house.

Historically, Optimum would buy-in the acrylic casing that the neon sits in. Now, thanks to the X24, the company is fabricating these in house – at far better quality than anything it was buying-in. The same applies to folded Dibond trays and flatcut lettering.

“It’s revolutionised the way we work,” says Matt. “We’re doing so much stuff on it. It’s unbelievable. It’s such an amazing machine.”

One of the surprising insights the X24 has bought to Matt is how restrictive his thinking had been in the past albeit unconsciously. “I didn’t realise it but we would push a client to work in a certain way because we didn’t want to have to buy stuff in, now I’m pushing for all sorts of things.”

The X24 is driving innovation. The latest job for a VIP event for Rolex at luxury Northcote Manor Hotel and Michelin Star restaurant in Blackburn, involved the creation of a 3D gold crown featuring RGB colour changing inside of it. “We did that because of the Kongsberg X24,” he says.

Matt christened his company Optimum meaning the most favourable situation for growth and success. Also the inclusion of the word ‘mum’ pays homage to the unstinting emotional and practical support of his family.  Established now for ten years, Optimum has steadily built up a reputation for quality and excellence.

“I’m such a perfectionist which can annoy people sometimes,” admits Matt. “When Nick Reed at CMYUK said the X24 was accurate down to .01 of a millimetre I didn’t believe him, but it’s absolutely true and this accuracy allows us to come up with all types of concepts with confidence. I’ve come full circle making furniture now, which in the past really excited me. Walking into the CMYUK showroom and seeing the X24, I’ve never looked back.”

CMYUK appoints Materials Solutions as its distributor in Ireland