CMYUK Update from Jon Price, Group Finance & Operations Director.
The CMYUK Group is continuing to operate as normally as possible in these very challenging times, with a skeleton crew in place.
Whatever your enquiry, the best way of ensuring you get a prompt response is to e-mail sales@cmyuk.com.
This mailbox is monitored constantly during normal business hours. We very much appreciate your continued support and patience. 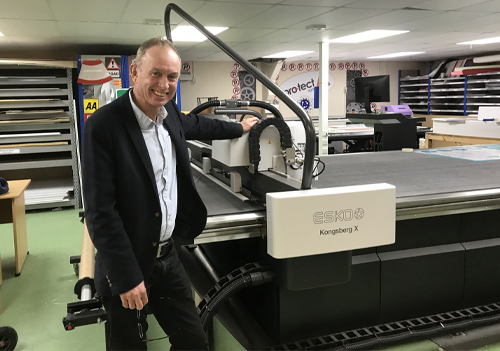 Protect Signs has made a business from public warnings.  It specialises in the design and manufacture of portable, temporary, traffic safety and signing products for the UK emergency services, public sector services, utilities, contractors and the like.

In the world of portable road guarding, the Weston-super-Mare–based Protect Signs is in the premier league. Owner and managing director David Lundy has been at the helm since 1998 and his father was the inventor of the original roll-up police sign.

Mr. Lundy Senior had a sign factory back in the ’60s called Space Saver employing 25 people. The company changed hands over the years, but David Lundy Junior resurrected it as an independent entity. Protect Signs now has a staff of 28, some of whom have been with the firm since its earliest days.

Portable warning signs have continued to be the business mainstay. “You’d class that as anything from a police sign to a man at work sign either rigid or roll-up,” says David. “We supply companies such as British Telecom where we’ve designed products that go into the back of BT vehicles that not only fold up very small but also reduce the weight to help lessen the vehicle load and improve fuel consumption.”

During the last eighteen months Protect Signs has started to broaden its scope. This in part is due to the versatility of the digital printing and finishing equipment it has recently installed, which sits nicely alongside its metal fabrication, CNC routing and high-frequency plastic welding.

“We’re moving towards the more commercial sector,” says David. “Investing in new technologies ensures we stay ahead of the game; it helps in the development of new products and production techniques whilst bringing with it the benefits of lean manufacturing and increased productivity.

“With the introduction of the New Mimaki and Esko, we are well placed to expand our services into the private and commercial sectors.  Improved manufacturing broadens the products and services we offer to new and existing customers.” 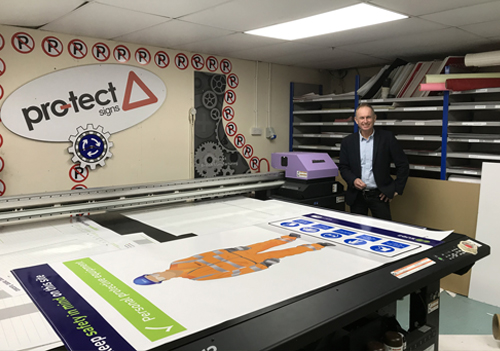 The JFX200-2513 EX flatbed printer is the newest member of the Mimaki family of UV LED flatbed printers. It offers a choice of inks, including white and clear, extending creative opportunities with the ability to print to a wide range of substrates such as Banner Vinyl, Foamex, Correx and Dibond amongst many others.

“The Mimaki flatbed is a well known, well-established workhorse,” says David. “What I like is its simplicity, there’s nothing complicated about it. It produces great quality prints and does the job it was designed to do really well.  We work mostly with 8 x 4 ft. sheets so it fits the bill perfectly.”

The company has also installed an ESKO X24 digital cutting table with a conveyorised bed and integrated camera registration system. The X24 came with the standard configuration of a MultiCut head with 1KW router, Rigid Material and Kisscut tools. It also qualified at the time for a promotion that gave it a FOC copy of the i-CUT suite, a collection of pre-production software specifically for users of large format digital printers and/or finishing systems.

“We produce large volumes of repetitive printing onto banner vinyl, each of these rolls has to be cut into various shapes. We can now take printed rolls and put them on the ESKO X24 for the cutting with little human intervention.  It’s really made production slicker, with less likelihood of error when you’re cutting out different shapes.  It’s really living up to my expectations.

“I chose the Esko X24 rather than opting for a Zund because I’ve seen old Esko tables that are over 20 years old still working, which is quite impressive. I haven’t seen any old Zund tables. When I was talking to Nick Reed at CMYUK about maintenance for these tables, he just said they don’t go wrong,” says David.

The Esko X24 allows Protect Signs to offer its customers a better service.  In the case of one of its larger clients, large volumes of 50m rolls of pre-printed panels of varying size prints were supplied ready for the customer to hand-cut and apply to substrate. Now, thanks to the X24, Protect provides pre-cut shapes ready for application, thereby reducing client costs, improving productivity and future-proofing the services it offers.

Says David: “No one knows what the future holds but one thing is certain, in this fast-moving digital world, business must embrace and invest in new technology ensuring it maintains the best possible service and delivery to all clients large and small.”

Growth success for Imaginators as it switches to PONGS®