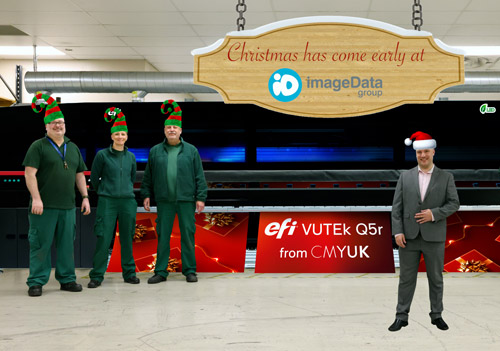 imageData Group has ordered an EFI VUTEk Q5r UV LED dedicated roll-to-roll printer. Due for installation in December, this 5m wide industrial powerhouse is set to take its place on the production frontline, where it will replace a ten-year-old Durst printer.

“Buying any new piece of kit is a bold move but you have to move with the times. However, when you change supplier and shift to another equipment manufacturer, that’s an even bolder move as you’re beginning a new relationship. CMYUK has given us both confidence and reassurance that the after sales support is there, which has been a big part of the decision-making process,” says Glen Patrick, Chief Operating Officer, imageData Group.

After Production Manager, Steve Milner visited CMYUK’s showroom and training facility in Shrewsbury for a demonstration, Glen also took the opportunity to survey the printer at a live CMYUK customer site. “It was a good experience and felt like a personal service.  The business in question spoke very favourably of the VUTEk and its performance.  It also gave CMYUK a glowing reference that validated everything that they had told us,” says Glen.

Updating the old Durst printer was left longer than usual due to capital equipment upgrades elsewhere in the company.  Due to the company’s existing flatbed firepower, it decided to invest in a dedicated 5m roll-to-roll replacement rather than opting for a hybrid. At present the company uses an existing flexible UV printer on which to output stretch fabric graphics, however the new VUTEk Q5r will enable it to expand capacity on that offering and provide backup should the need arise.

While Glen expected to see a significant technical evolution between a decade-old machine and a new generation printer, he was seriously impressed with the EFI VUTEk Q5r capabilities and feature set.

“It’s fast, prints at very high quality, there’s much less waste when setting up, and it includes inline finishing that will reduce production bottlenecks, so it’s superior across the board,” he says.

The EFI VUTEk Q5r offers the ultimate in productivity by providing a complete RIP to finished product on the same platform. An industrial workhorse, it offers a serious competitive edge through the availability of numerous Power Tools that include automatic inline quality inspection, inline finishing for all-in-one printing, cutting, slitting, and collecting.

The business runs three roll-to-roll machines, which at times produces a bottleneck at finishing stages. “The new printer will obviously be able to finish a lot of things inline, which will really help in removing that pressure,” says Glen.

The Q5r offers up to nine colours including white and clear, and prints at a resolution of up to 1200dpi, with precise 3-point text. imageData prints volumes of clear cling vinyl, so white ink was an absolute requirement. It also chose the clear ink option.

“We think that clear could be a useful USP to offer to customers as it adds the effect of a spot UV or an overall varnish without incurring a significant cost increase. Perfect for a Christmas campaign,” he says.

In addition to white and clear applications, the Q5r offers double sided printing, multi-layer print modes, and minimal supervision continuous printing with multi-media handling solutions for large and heavy rolls. It also offers simultaneous multi roll printing, allowing imageData to utilise the 5m width by printing either 2 x 2.5m or 3 x 1.6m rolls or a combination of both, whilst having the capacity to print vast single piece graphics.

The VUTEk Q5r has been designed to reduce running costs and ramp up environmental benefits. UV LED cool curing uses significantly less energy consumption at 2.9kW when compared to the 10kW it takes to run traditional Mercury lamps. “Lower power consumption has become key, which maybe in years gone by wouldn’t have been in the forefront as it is now.

“Other features like the reduction in make-ready waste is impressive. Webbing the printer has reduced linear material wastage to 400mm whereas in the past we’ve dealt with 4 linear meters that represents a great deal of savings over the year,” says Glen.

Says Glen, “Technologically speaking we’ve evolved with Inca, HP, Xerox, and Durst, and now we’ve begun a new journey with EFI. We’re excited to partner with CMYUK, and very much looking forward to the arrival of our new printer, which has brought Christmas a little bit earlier for us this year.”

Standbuilder purchases an AE Sewing Machine hot on the heels of a Trotec 4000 laser cutter, both from CMYUK