Flatpack Forces invests in a Trotec Speedy 300 from CMYUK 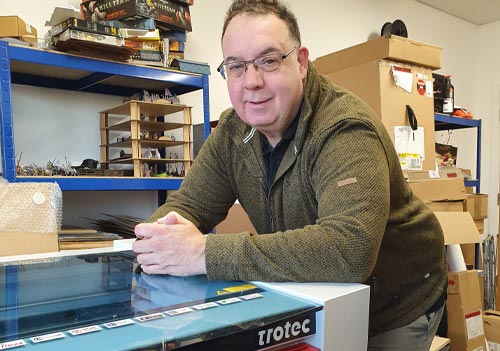 Flatpack Forces has installed a Trotec Speedy 300 laser cutter and engraver from CMYUK. It works alongside a Mimaki UV 3042 FX printer also previously purchased from the company.  The Trotec 300 replaces a rebadged Chinese manufactured laser cutter bought just over a year ago.

“Quite frankly the difference in the way that these two laser cutters operates is like having a rubber band powered car and a Mercedes. On the face of it, they appear to do the same thing but actually it’s not the case at all,” says Andrew Fielden, founder and MD of Flatpack Forces, which specialises in high-fidelity realistic architectural models and gaming items.

Andrew was compelled to search for an alternative to his Chinese import when he was told that it would take 5 weeks for an engineer to come out and fix a broken part.

Coincidentally, being local to CMYUK’s demonstration and training centre in Shrewsbury, he happened to attend one of the company’s popular Open House events, and saw a Trotec Speedy laser cutter and engraver in action.

“It’s called Speedy for a reason. The manner and speed in which it cuts and engraves is mind-blowing especially when you’ve been used to the machine I had.  The Trotec is really impressive,” he says.

The 300 belongs to the Speedy family that engraves, cuts or marks the widest possible range of materials including glass, plastic, wood, rubber, leather, metals, textiles, cardboard and MDF.

The Trotec Speedy is the fastest engraver in the market with speeds of 4.3m/s or 5g and laser power of up to 120 watts. A Motion Control feature cuts jobs 8 x faster than comparable laser machines, and with High Dynamic Laser Range Technology, the finest of details and small lettering are pin sharp even at full speeds.

Other features that Andrew particularly likes are the way the bed height is set and the ease of maintenance.

“Cleaning the lens is something I would try and put off on my old machine because you almost have to take half the machine apart to do it. With the Speedy 300,  you just unscrew the casing, slide the lens out, clean it, and slide it back in. Making it so easy means you’re far more likely to keep on top of maintenance,” he adds.

The deciding factor was the fact that Andrew could etch onto materials without burning them. “It was a revelation. I can now use a range of materials, work quickly and be flexible. The closest thing to this is 3D printing but what would take just 10 minutes on the Speedy, would take 10 hours with a 3D printer,” he says.

Reliable customer support was another important area of consideration.  In addition to a 2-year warranty, Andrew now feels he has complete peace of mind should anything go wrong.

“You really need good customer support and after the last experience, I’ve realised that this is really important. The more serious you are about what you’re doing, the more serious support is, which is why buying the Trotec from CMYUK is such a big plus,” he says.

This was originally purchased to create flat photographic textures for model surfaces but Andrew also used it to create raised coloured textures by building layers of ink through multiple passes. It looked good,  but ultimately was too expensive to be a mainstream production method.

In the three years since the company was founded, Andrew has really come to understand what customers like, impacting his technology buying choices.

“Rather than flat photographic virtual textures, it became very obvious that customers would pay more for uncoloured physical textures that they could paint themselves. However, the ideal of the matter is physical texture with colour, which we can now do through the combined abilities of the Mimaki printer and Trotec cutter,” he says.

These abilities are currently being applied to model railway items and war game tokens but the long-term vision for the business lies in the creation of detailed realistic architectural models.

Says Andrew: “I have looked at a number of different production methods to create realistic and cost-effective model structures. I have a collection of 3D printers and CNC routers that I just don’t use. The Mimaki 3042 FX and Trotec Speedy 300 are the only two pieces of equipment I need.”