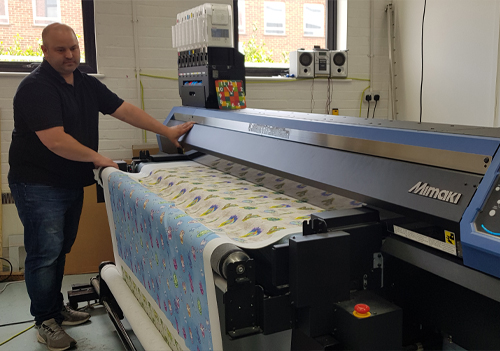 British Fabric Printing (BFP) has installed a Mimaki TX300 pigment ink printer and Klieverik VERTEX calender press from CMYUK. This enterprising start-up has been trading online for the past 5 months and in that time has output 650 plus orders.

“We’d never had a decent experience with a pigment ink printing company. We’ve never liked the finish but when we saw the Mimaki pigment inks on the TX300 – it really wasn’t like anything we’d ever seen before. The way they felt too was really nice, you could hardly feel anything on the fabric surface,” says Stuart Kettridge, co-founder/owner. 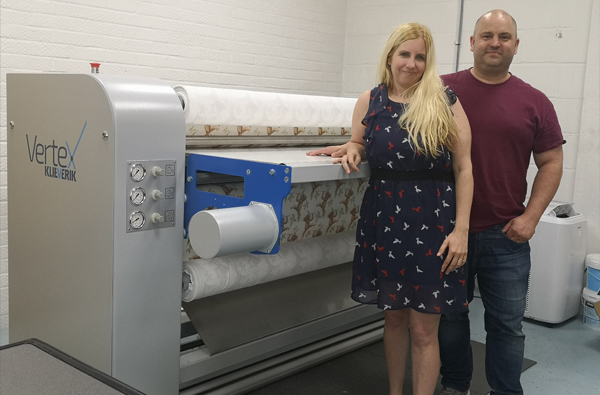 Printing at a stretch

The company specialises in printing stretch jersey fabrics. “We set-up the company due to the fabric inconsistencies across the globe. There’s nobody in this country that prints stretch jersey that we do. Everyone was crying out for a UK printer to do it,” says Stuart.

Wind back four years and co-founder/owner Lisa Bence had set-up an online children’s clothes store – selling her own designs. Stuart meanwhile was a stone cleaner by day in the City of London and audio mastering engineer by night.

The popularity of digital store and Lockdown forced a decision, and the pair decided to concentrate on the children's clothing company and the digital fabric printing business. Lisa had been buying materials from outside the UK but was disenchanted with the process due to the number of issues she experienced with the fabrics.

The initial idea was to purchase a fabric printer that would primarily be used to output her own designs, and offer a bespoke fabric printing service to other online digital stores as a secondary activity.

After researching equipment online, it became apparent that a Mimaki printer would be the perfect choice, which led the two of them to Brett Platt, Textile Business Manager at CMYUK.

“We had a very clear idea of what we needed to do. We worked everything out before we bought the Mimaki. Investing in this piece of equipment was not something that we would enter into lightly. We knew the demand was there. It was never even close to being a gamble –  if it was, I would never have considered it,” says Stuart.

Initially, Stuart and Lisa had chosen to use reactive inks, which post printing, involves hot steam fixation and extensive washing. This ensures that dyes penetrate the actual strata of the fabric resulting in high colourfast and washfast prints.

“Right from the start we were in trouble with the reactive inks but Brett at CMYUK helped us so much. We were having so many problems with the fabrics.   The coatings were causing real colour headaches and it was impossible to speak to our usual suppliers because of furlough issues. It really was a nightmare,” says Stuart.

After throwing away 800m of material and closing the website down to avoid letting any customers down, Lisa and Stuart decided to change direction and embrace the pigment ink process.

They had been somewhat surprised and impressed by the look and feel of Mimaki’s pigment inks but had shied away from them,  partly due to pre conceptions, and also because of the cost of a calender press.

“It’s an amazing piece of kit. It does exactly what it says on the tin. It’s solid and robust. It warms up very quickly and holds its heat unbelievably well for a smaller drum.  Energy-wise its very good too. I’ve learnt lots of new little tips by using it. The combination of the calender with the Mimaki pigment inks has reduced my contact time by half. We plan to do sublimation work in the future, and I’m looking forward to seeing how it copes then,” says Stuart.

BFP had its Mimaki printer flushed to take Pigment inks in January but as the VERTEX is a new piece of equipment there were no pre-built customer units available.

“I made a phone call to CMYUK asking if they knew of anyone who could rent out a heat press for the time being. Brett Platt and Robin East [Group Sales and Marketing Director] offered us the use of their current in-house Klieverik and the newly installed demo unit until our own VERTEX was built. I couldn’t believe it – no one would do that! So, for the last three months, I’ve been up at Shrewsbury on a Friday pressing our fabrics,” says Stuart.

“We’ve had no other dealings with any other printing companies and to be honest, I wouldn’t go anywhere now. I just ask Brett if I need something. He’s such a genuine bloke and the trust is absolutely there.” 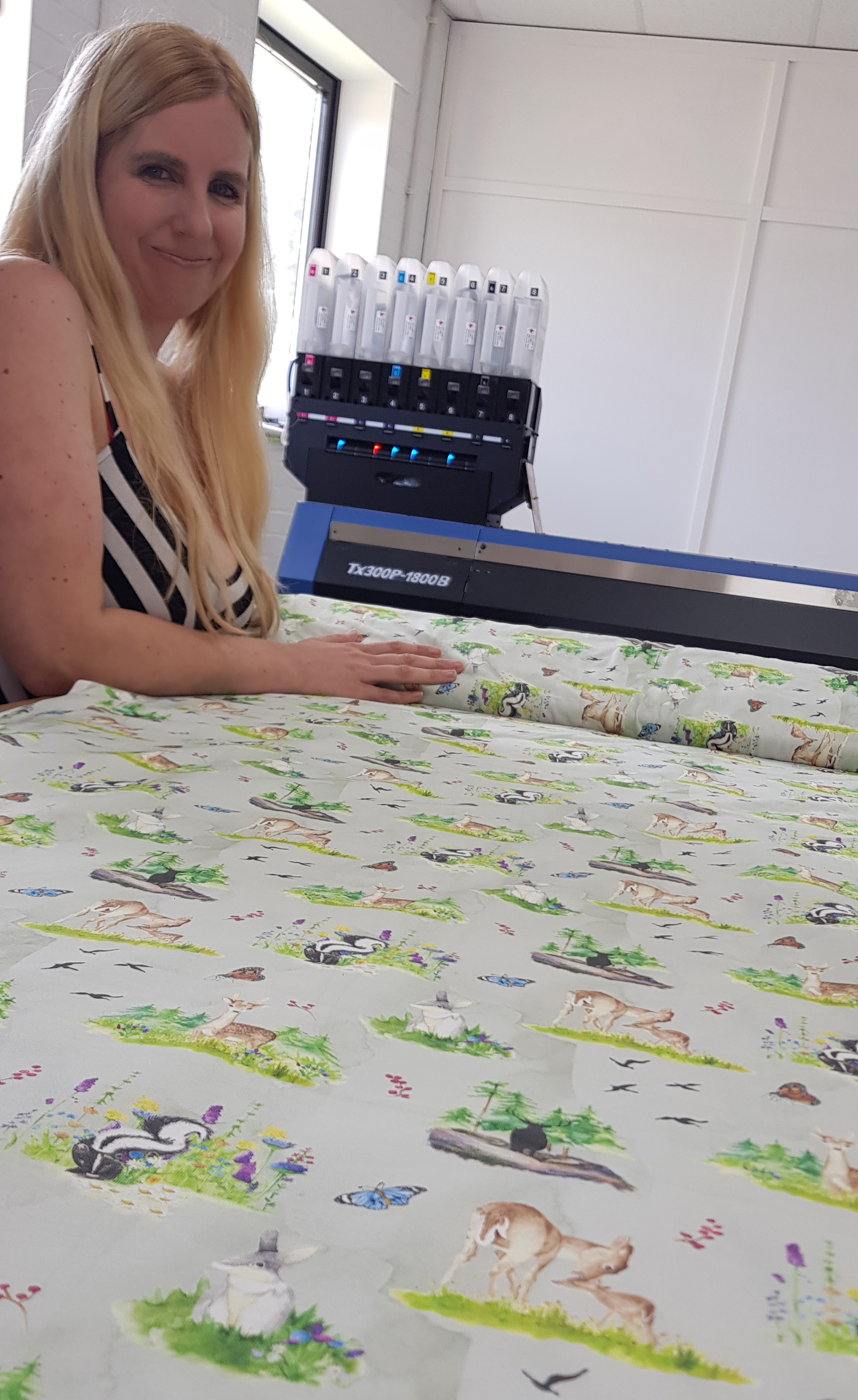 Once the pigment inks were set up and the calender press organised, BFP once again reactivated its website – and hasn’t looked back.

“It’s an entirely different ballgame with pigment inks. The sharpness is brilliant. Everyone comments about the detail especially when you’re using lighter or neutral backgrounds. In the short time I’ve been printing, I realise that with reactive inks you’re prone to bleeding.  Even when you’re steaming, you get a minimal bleed that changes the detail,”  he says.

“Even though working with the reactive dyes was difficult, I’m glad I did  because it’s really helped me to understand so many things.

“One of the things about the Mimaki (and I think I’ve amazed Brett at times) is that I’ve got it from printing 7m per hour to 12m. It’s absolutely my playground. I love it. It’s my nature to build and improve upon things.”

As well as revising its production methods, the original business model has also slightly changed. The demand from other smaller digital shops for printed fabric has meant that BFP’s in-house designs have been pushed to the back of the queue.

Lisa is also responsible for marketing, and she has harnessed the power of Facebook and Instagram to promote various product lines very successfully.

In years to come COVID may well be regarded as a watershed moment for business.  While there are stories of boom and bust, those businesses that have kept abreast of technological change and reacted quickly to market demand have thrived – natural selection albeit under unprecedented acceleration.

Going forward, BFP is determined to follow the wave. Says Stuart: “We are not going to be complacent – if something needs to change and we need to move into a new direction then that’s what we’ll do. We initially thought we didn’t want to print polyester-based materials but the colour is so vibrant, there’s such a large market for it, and you can't do everything on natural bases. They now produce polyesters from recycled plastics which, for us at least, is something that is very important in helping keep something else away from landfill.

“Kid’s clothing is our core business but there are so many décor opportunities associated with it. We’re now actively looking at dye-sublimation.  We’ve only really been up and running since February but it feels like we’ve been doing this forever.”